The story of how
Cashel Blue® came to be... 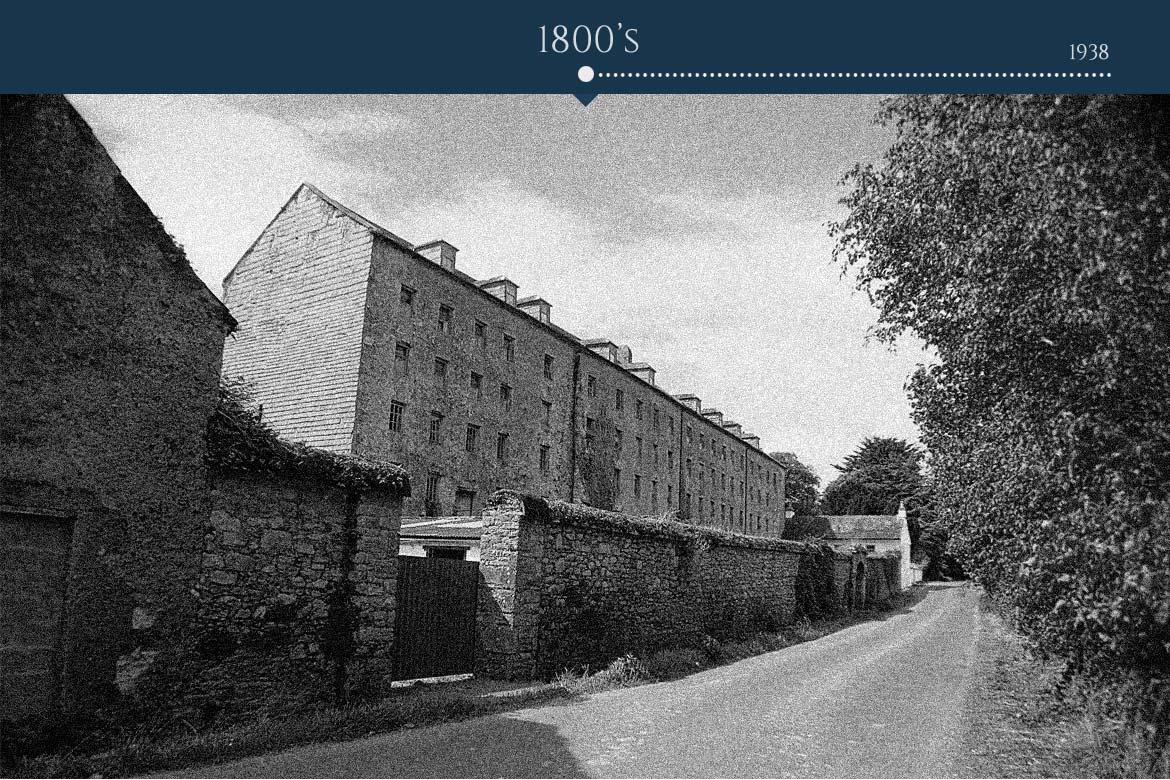 The Grubbs of Tipperary sustain a thriving grain-milling industry for over 100 years. A strong Quaker family in the south-east of Ireland, they have mills in Clonmel, Cahir, Carrick-On-Suir and many other parts of Tipperary and Waterford. A testimony to their historic presence in Clonmel is ‘Grubb Lane’ by the Westgate in Clonmel. 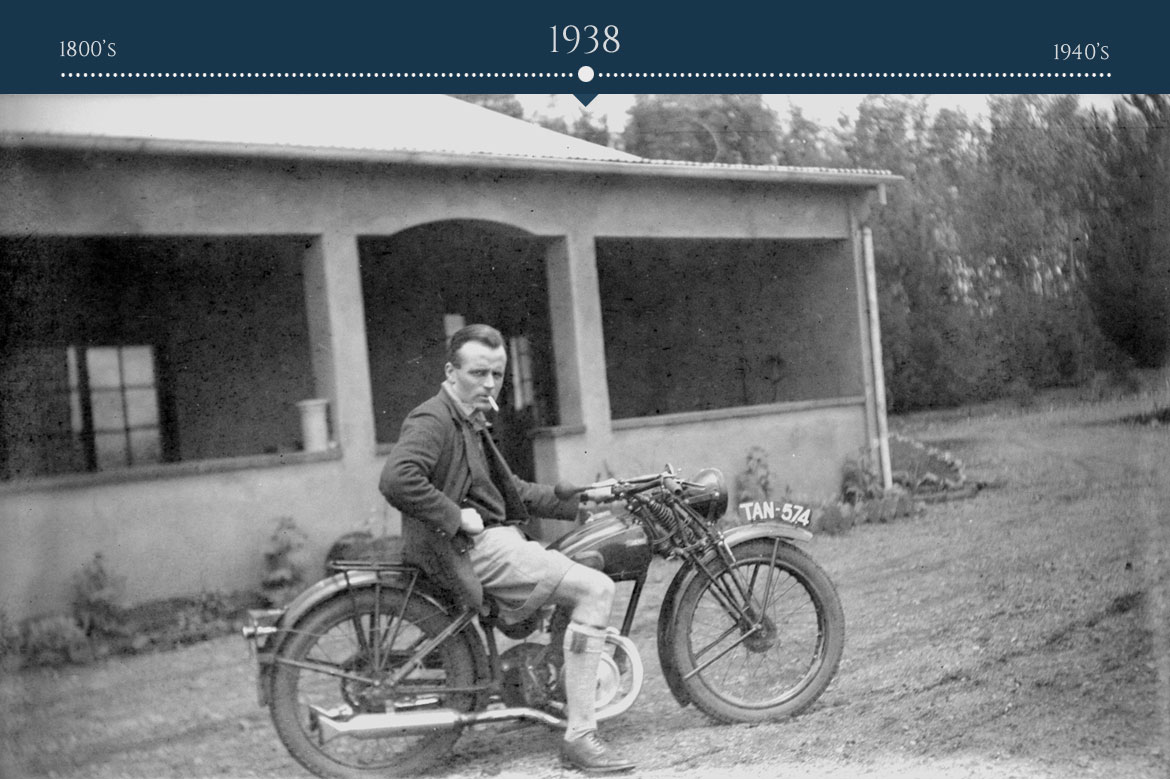 After his father sold the home farm at Ardmayle, Cashel, Samuel Grubb amongst other things, managed a peanut farm in South Africa. On his homecoming, he buys Beechmount Farm from a childhood friend, and moves back to his native South Tipperary to farm the land with his wife Phylis. 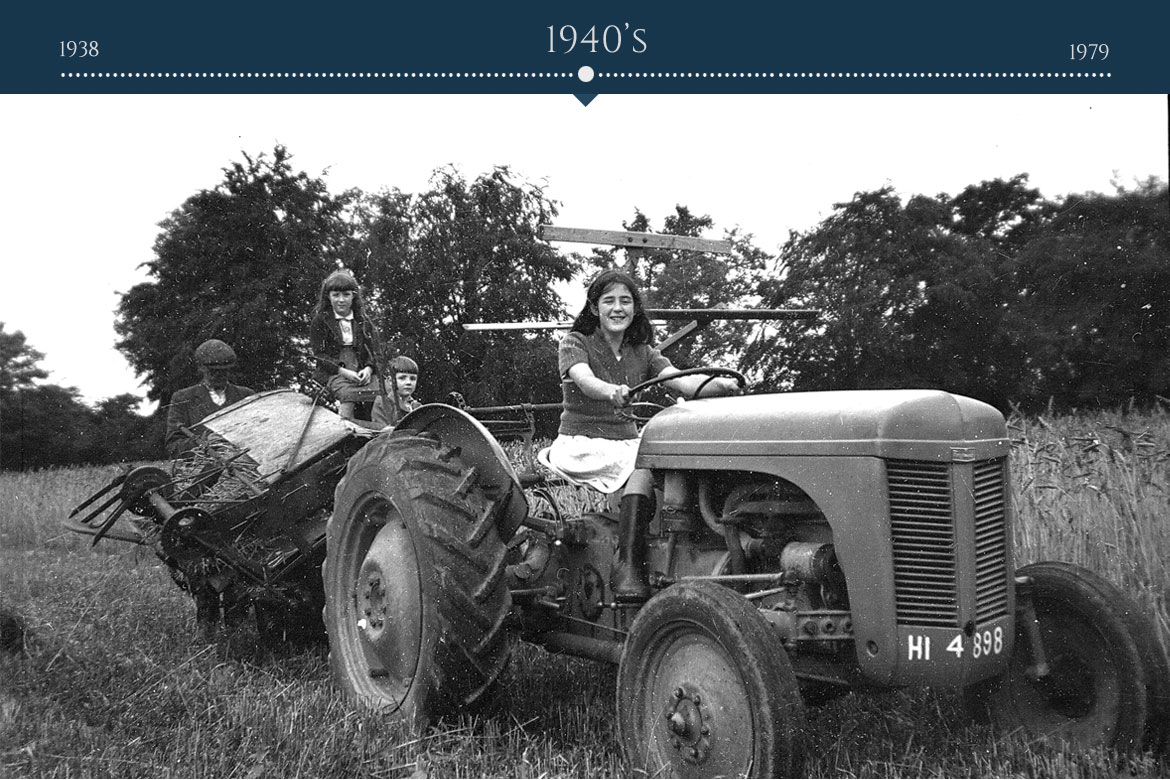 Samuel and Phyllis Grubb have 4 children: Clodagh, Petronelle, Louis and Brian. They turn Beechmount into a working farm. 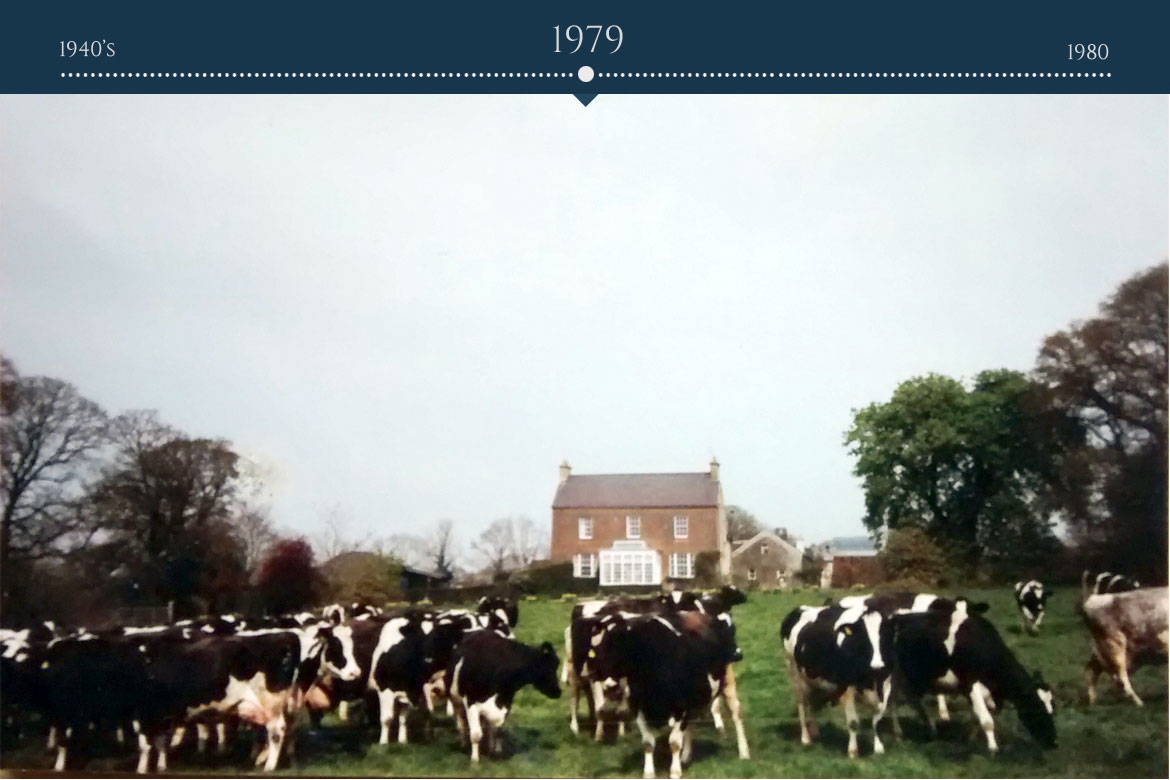 After the passing of Samuel, Louis Grubb and his new wife Jane move home to Beechmount Farm. They invest everything they have in buying a dairy herd of 90 cattle, and begin to produce milk and butter to sell. 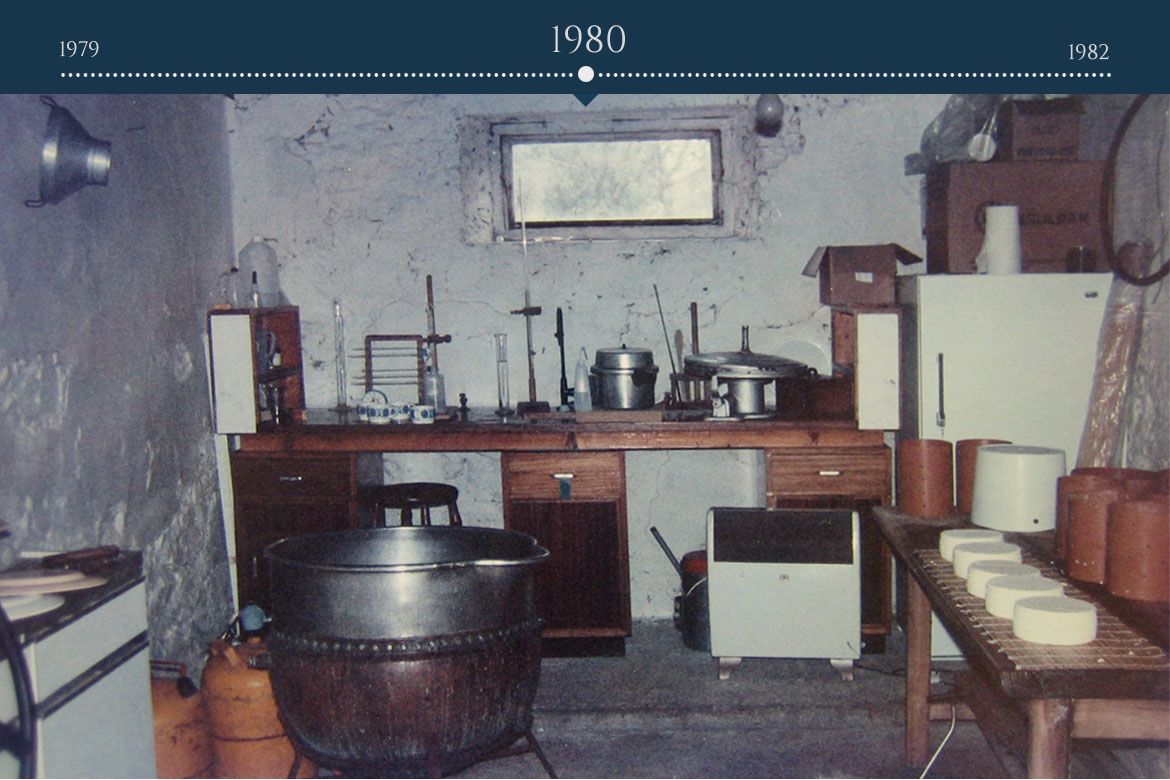 Jane Grubb – after attending a cheesemaking course – experiments making different types of cheese. This experimentation will take 4 years and a string of happy accidents until they have a product ready for market. 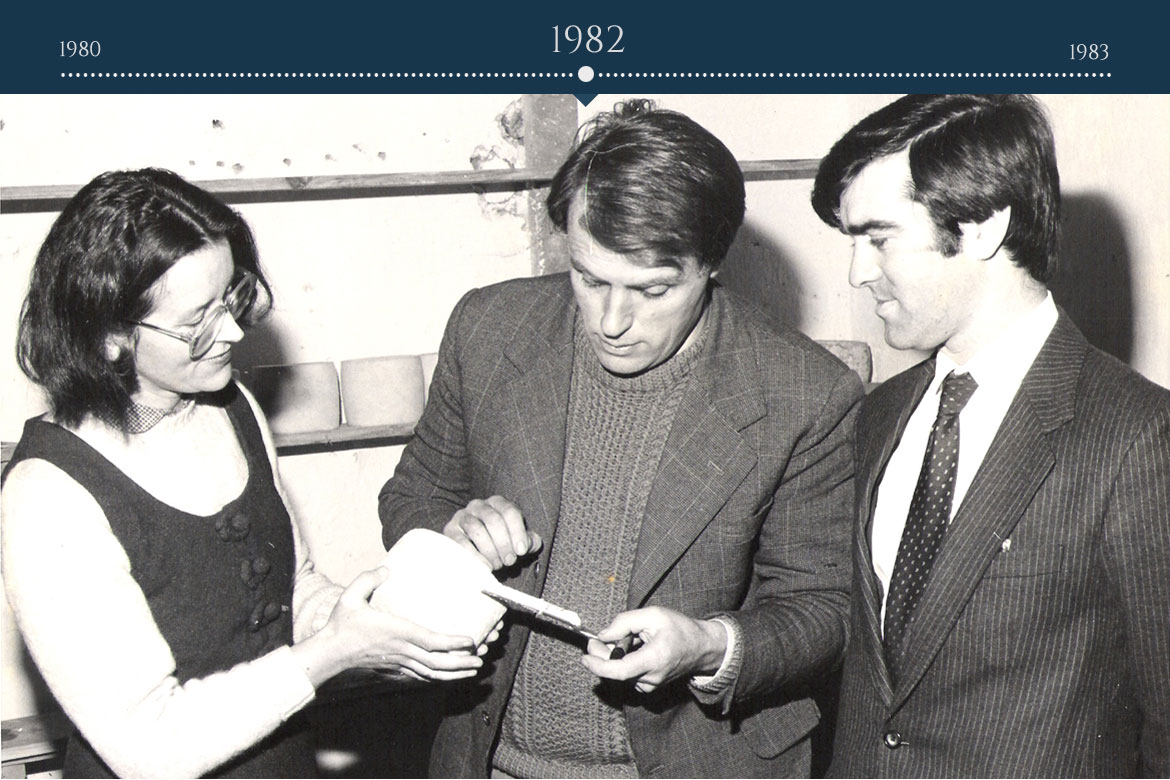 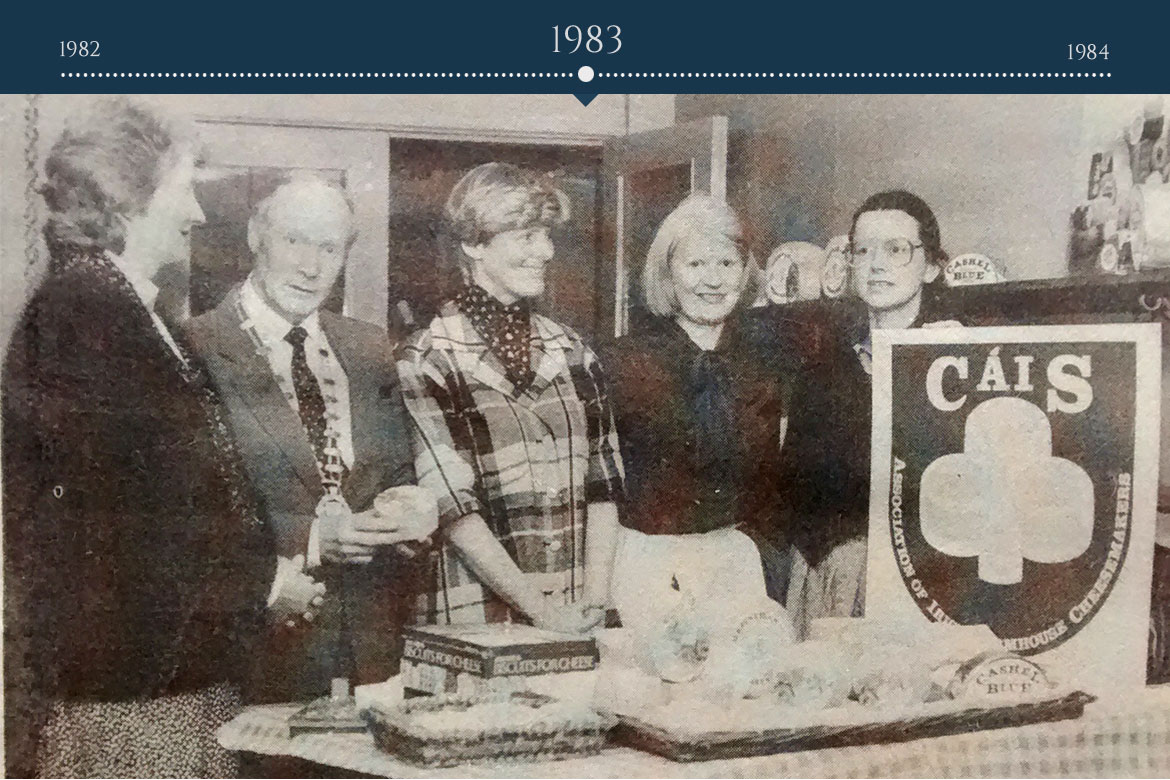 The Cais Irish Farmhouse Cheesemakers Association is formed. Jane and Louis involved from the early days, and still heavily involved to this day. Jane pictured on far right.
www.irishcheese.ie 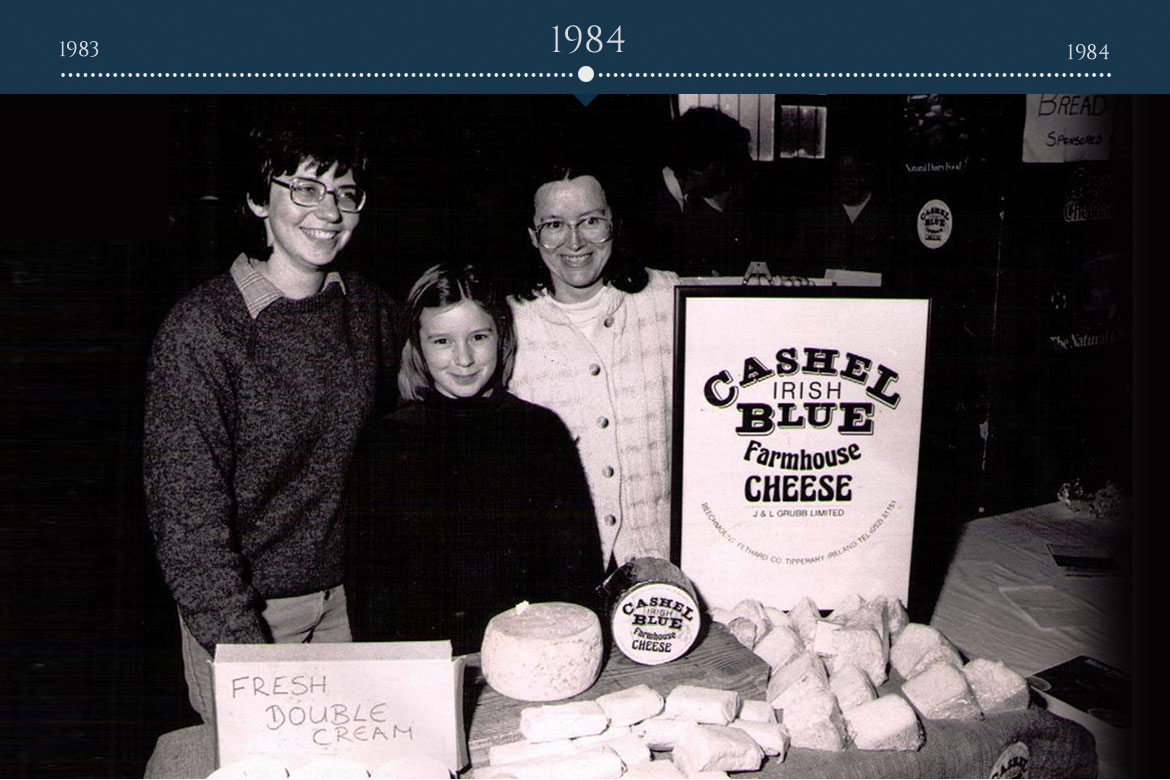 A Cheese Is Born:

After much hard work, and finally satisfied that the product is fit for market, Cashel Blue is born. As well as being one of the first Irish Farmhouse Cheeses, it is the first ever Irish farmhouse blue cheese – causing as much bewilderment as excitement in Ireland. 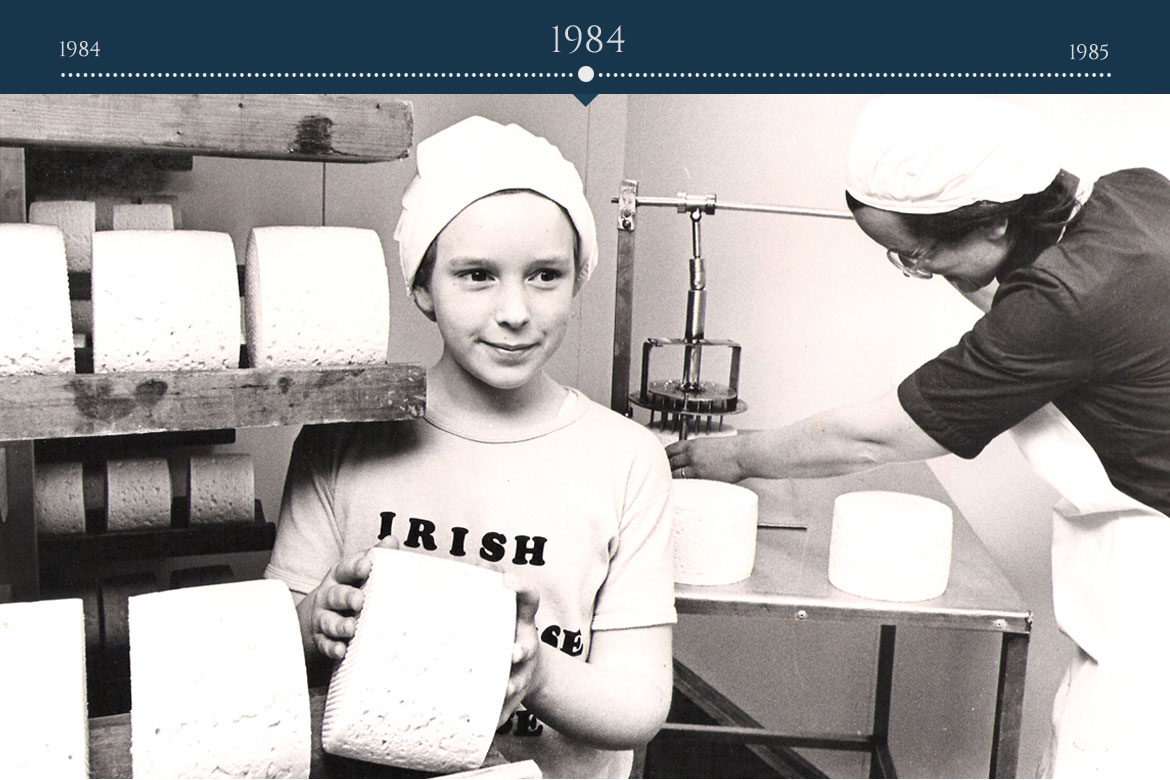 J&L Grubb Ltd is established by Jane and Louis Grubb. The couple put their names to the company by means of personal commitment to the journey ahead. 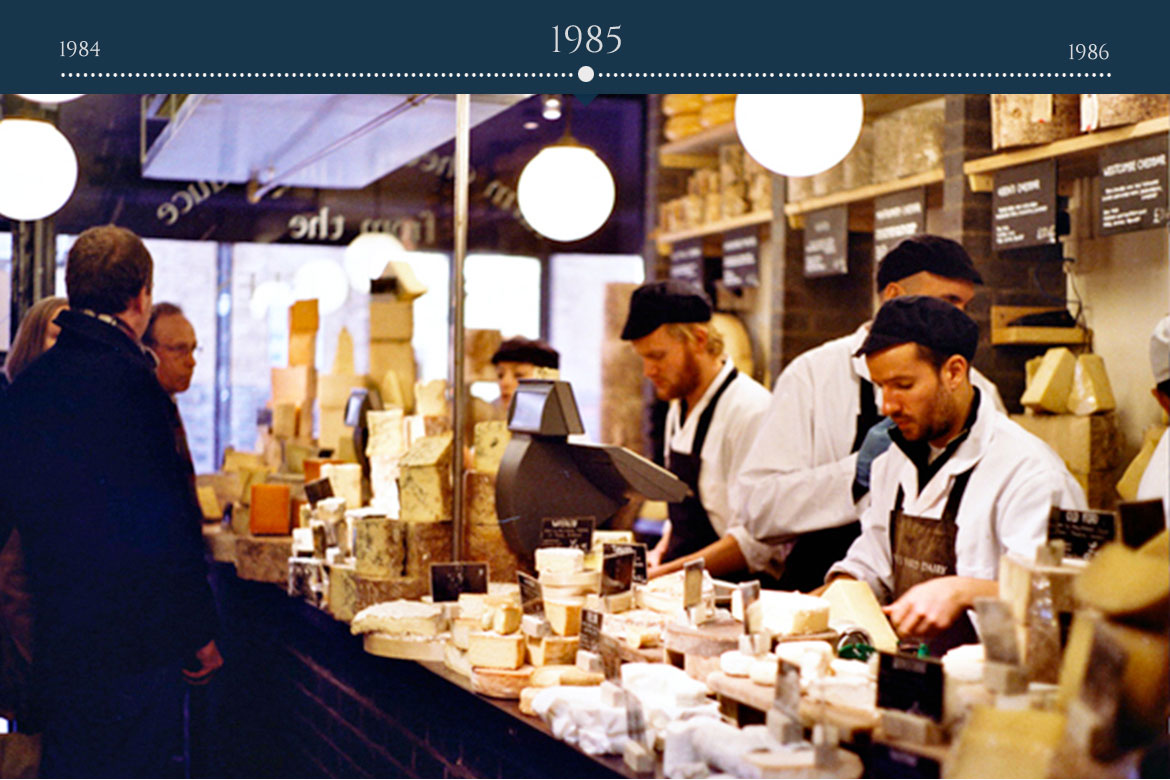 As a steady following has been growing, the London retailer Neal’s Yard Dairy soon catches wind, placing an order for more Cashel Blue than J&L Grubb can produce! This is the beginning of a longstanding relationship between Cashel Blue and the UK. 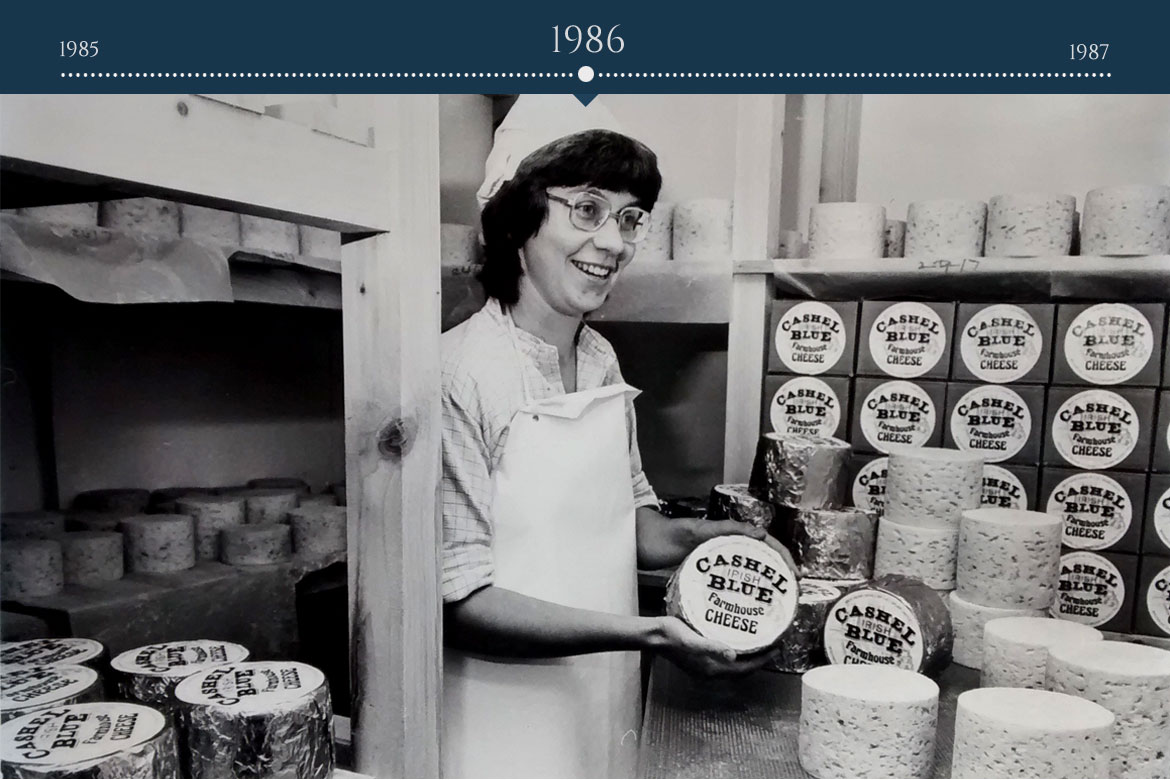 From Kitchen to Artisan:

A strong demand for Cashel Blue encourages Jane and Louis Grubb to employ staff – to expand their operation from kitchen scale to artisan. Historically, Beechmount farm employed 3 staff, this new chapter of cheesemaking marks the beginning of a new opening for local employment. 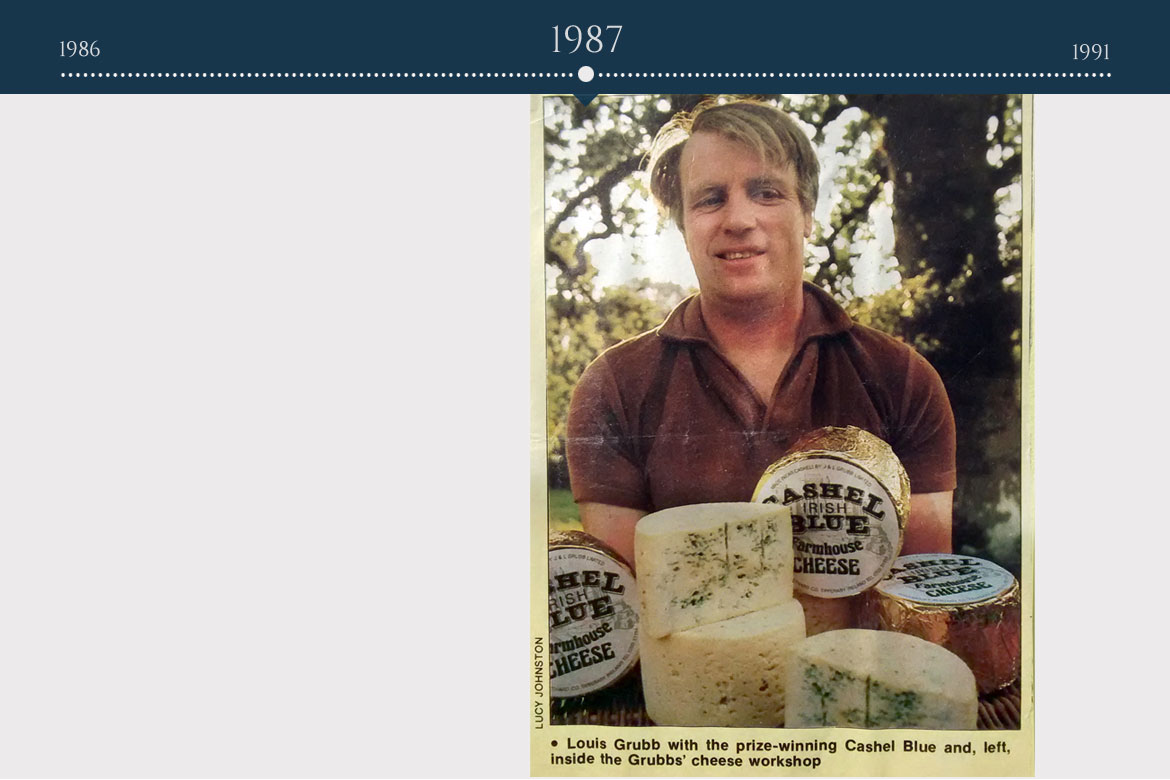 Cashel Blue wins Supreme Champion at the International Royal Dublin Society Spring Show. Amongst the judges is French Cheese Guru, Msr Patrick Arena from the legendary Androuets in Paris; “If Irish Cheesemakers continue like this, they are going to have very good farmhouse cheeses. You will be able to export many very soon”. Louis and Jane Grubb are delighted. 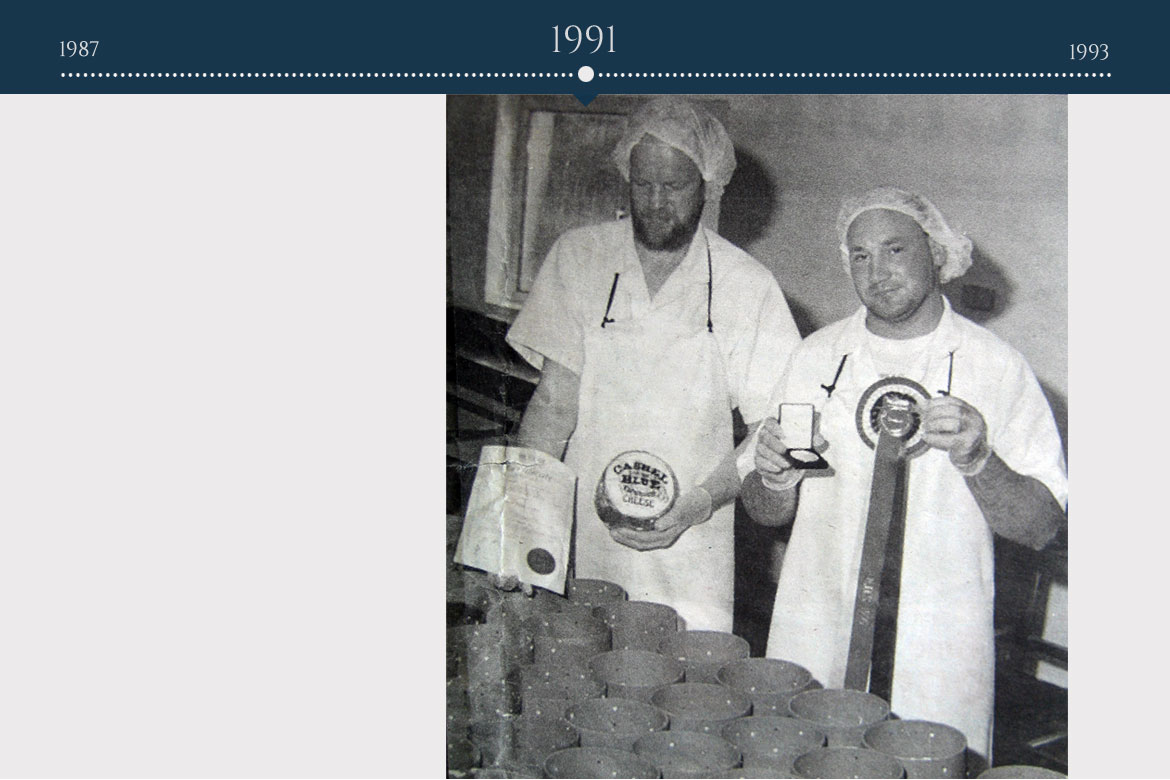 The Dairy is expanded, and production is increased to meet the growing demand for Cashel Blue. A major extension is constructed in the farmyard, and new cheesemaker Geurt Van den Dikkenberg is hired (pictured left). To this day he is our chief cheesemaker. 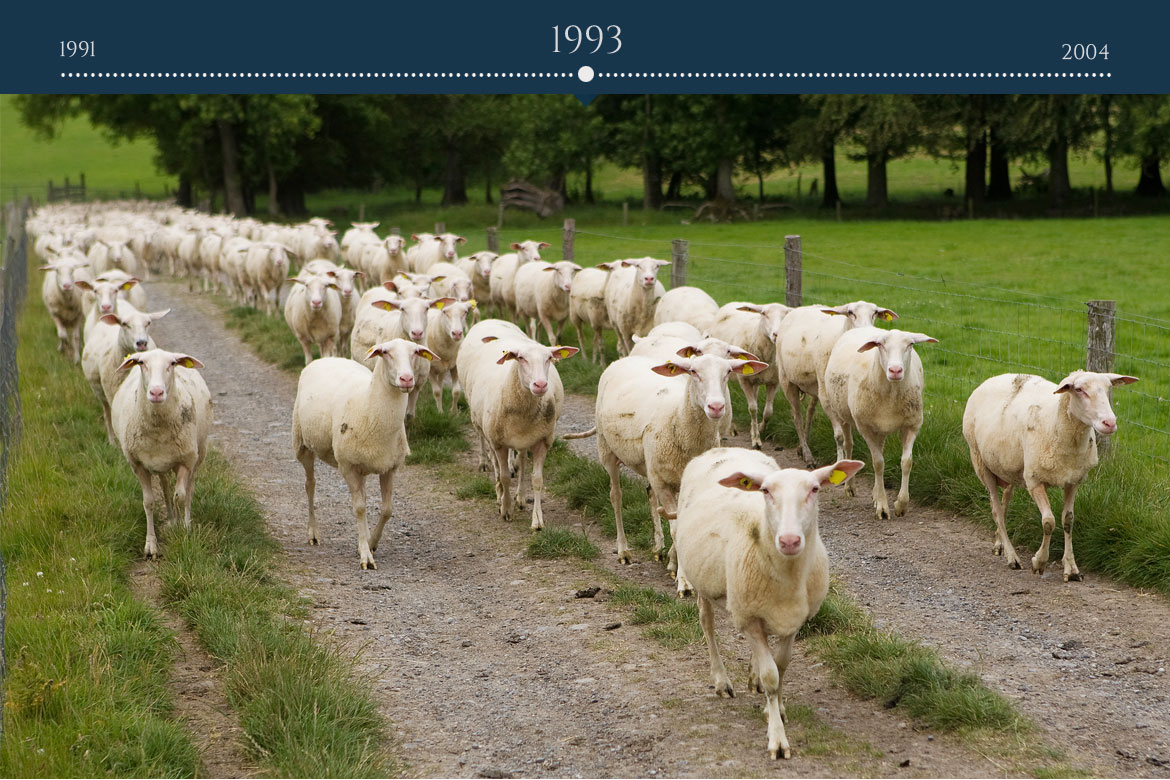 We start milking sheep at our farm for a new cheese – Crozier Blue – which to this day is still Irelands only sheep-milk blue. Crozier will go on to win numerous awards, and demand for it will grow gradually as a foodie-favourite over the next 20 years. 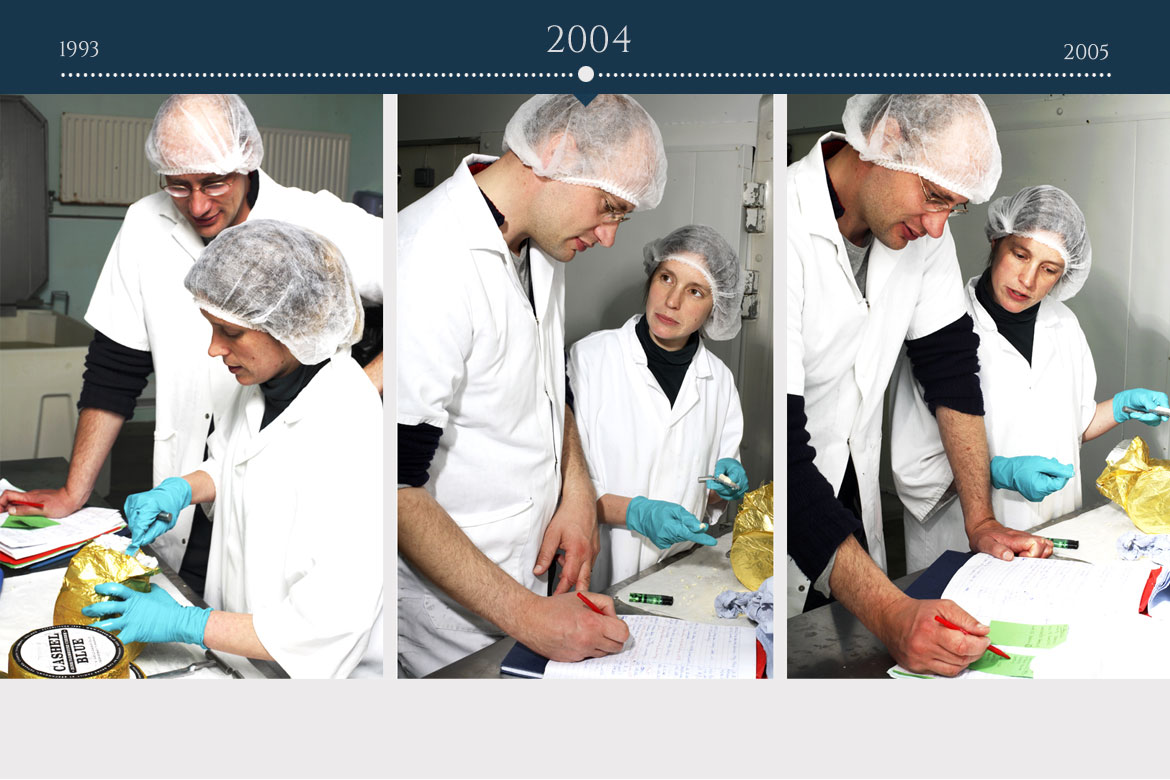 Sarah (Louis and Jane’s daughter) and Sergio Furno, recently married and having worked extensively in the wine trade, bring a new concept to Cashel and Crozier Blue – that of Maturing. Today they take the role of head Cheese-Maturers at the Dairy. 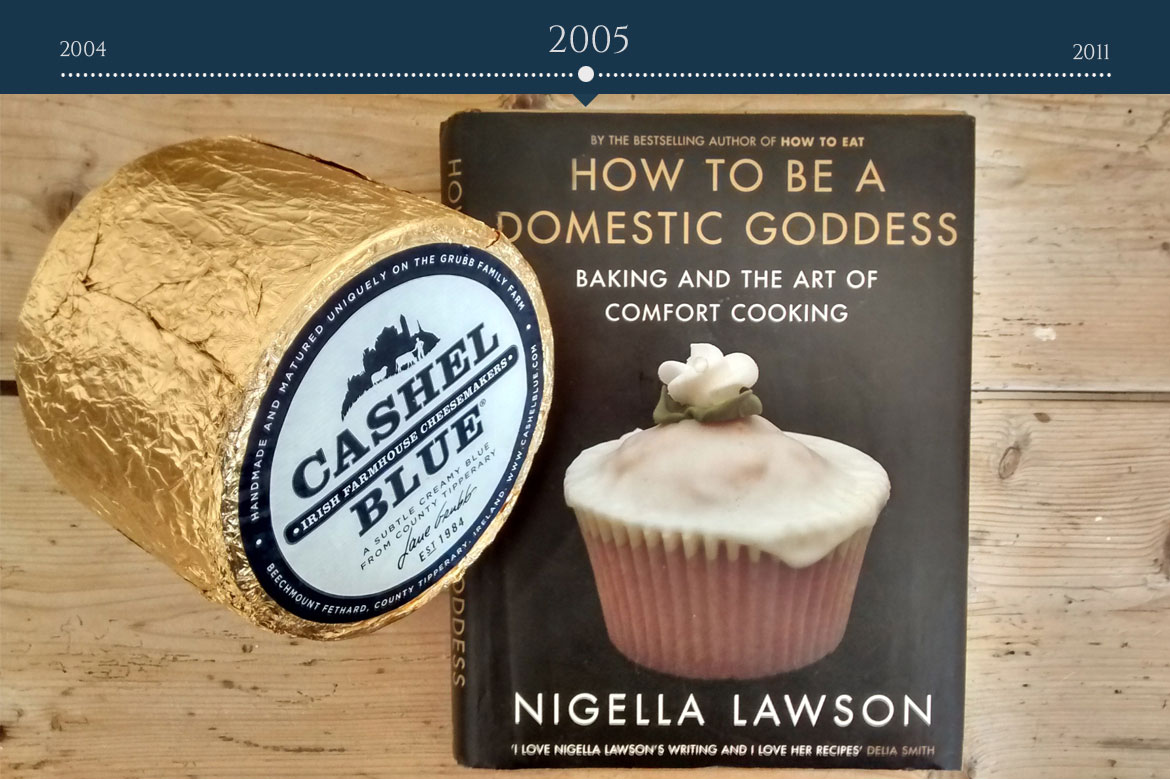 Nigella Lawson’s bestselling book, ‘How To Be a Domestic Goddess’, is first published – in which she includes a recipe for Cashel Blue biscuits. Lawson will go on to be a great advocate for Cashel Blue for the next decade. Thanks Nigella! 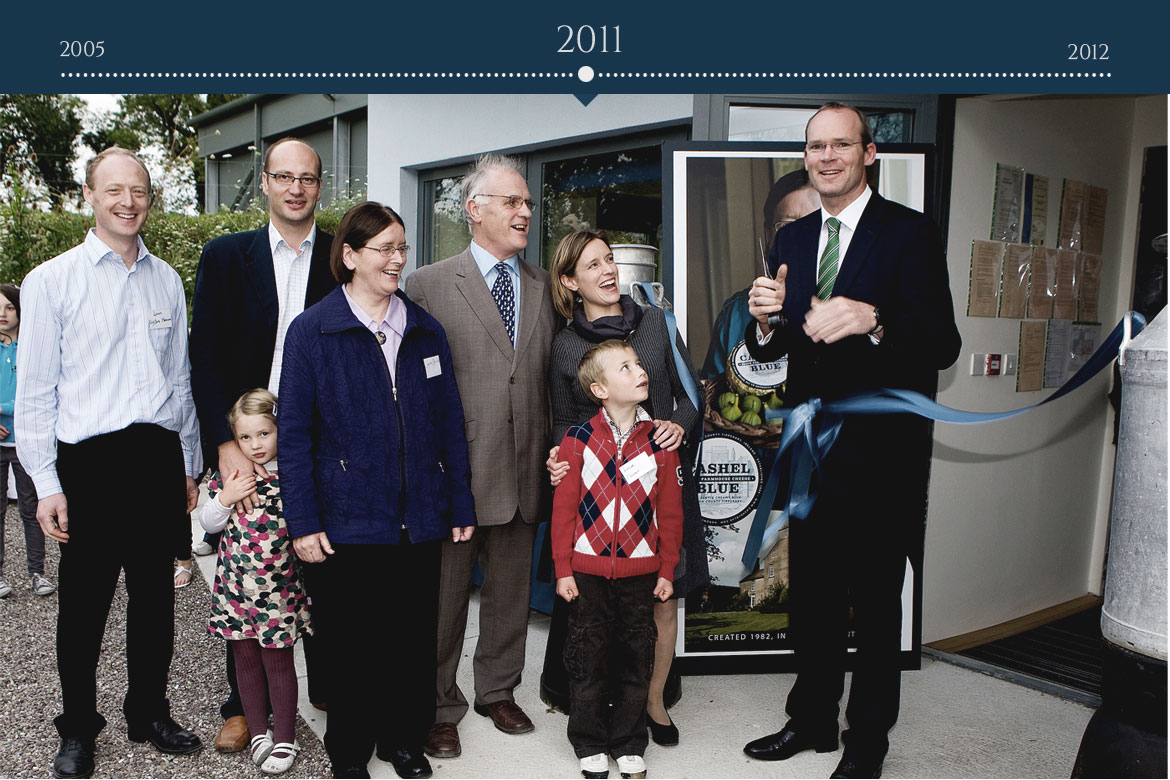 Minister for Agriculture Simon Coveney opens our new purpose-built dairy, designed by Louis’ brother, Architect Brian Grubb. A multi-million Euro investment, this is the culmination of 30 years hard work! It is a bold investment for the next generations in our family-owned business, and increases our production capacity. 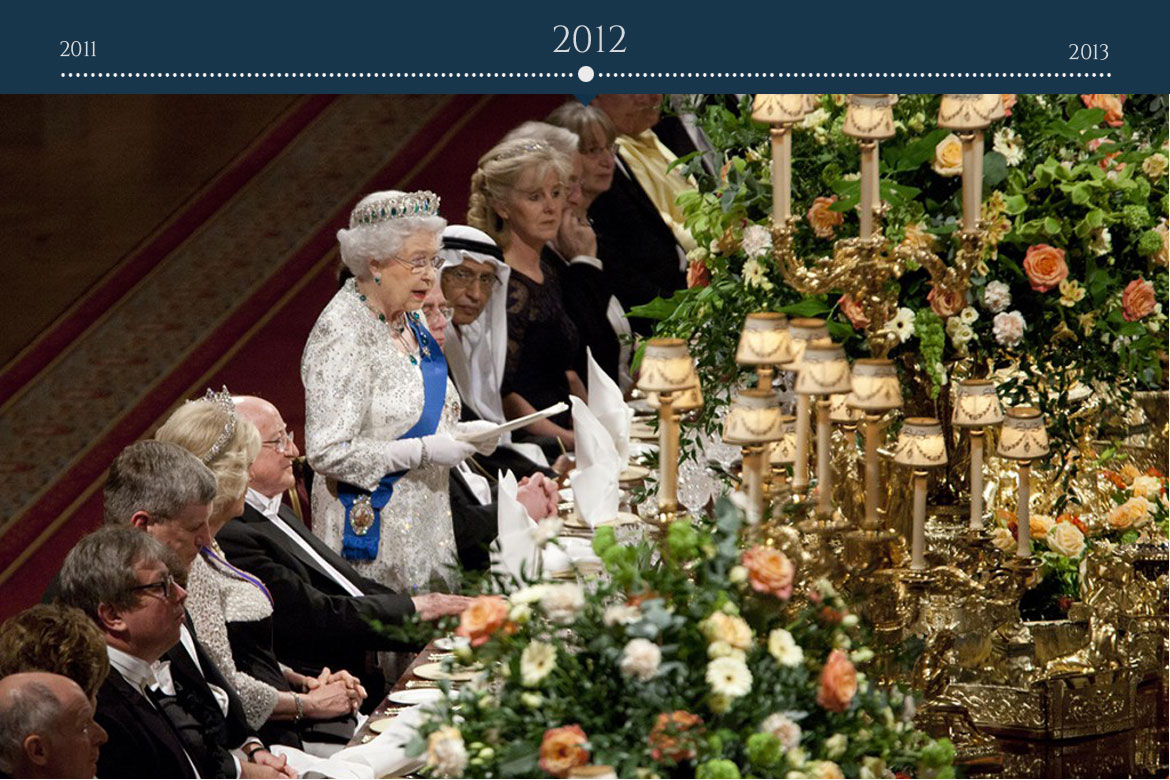 Queen Elizabeth II makes a historic visit to Ireland, and Cashel Blue is served up as part of the State Banquet at Dublin Castle. It is rumoured that on her subsequent visit to the English Market in Cork she made reference to her liking of Cashel Blue to the stallholders. 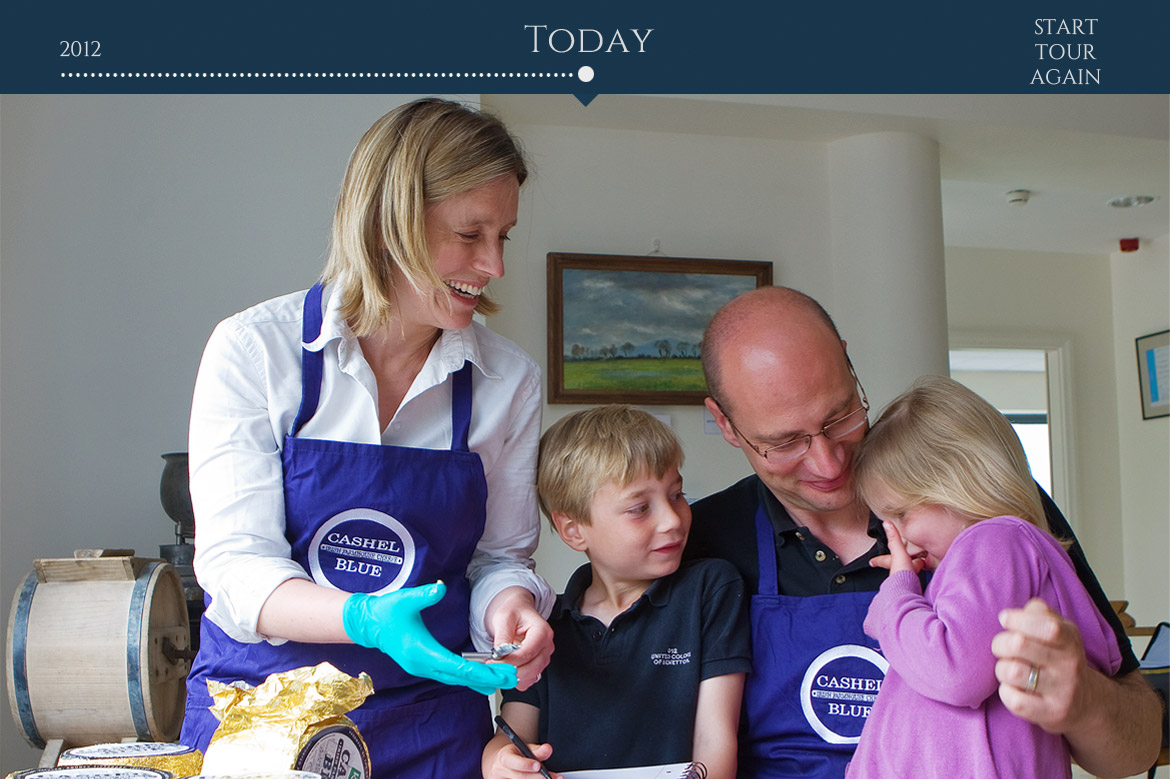 With the new generation now at the reins of Cashel Farmhouse Cheesemakers, we’re working hard to keep the quality of our blue cheese to the highest standards, whilst also developing new products. We’re currently experimenting in making hard sheeps’ and cows’ cheese, so keep an eye on our website for updates! Thanks for taking the tour.

A Short Biography of Cashel Blue®

The story of Cashel Blue® and Beechmount farm goes back to the 19th century, when the Grubb family, a Quaker family living in the south-east of Ireland, owned and ran several successful mills in counties Tipperary and Waterford. To this day there is a “Grubb Lane”, by the Westgate in the town of Clonmel.

The modern story begins in 1938 when Samuel Grubb, newly married and returned from his travels in many parts of the world, buys Beechmount Farm from a childhood friend and begins to farm the land, a task carried on by his four children. When Samuel passes away, his son Louis returns to the farm in 1979 with his new wife, Jane, and the couple invest everything they have to buy a dairy herd of 90 cows. The following year, Jane begins to experiment, making several varieties of cheese after attending a cheesemaking course. The experiments will continue for the next four years but, in the meantime, Jane begins to sell cheeses at the local country market in Fethard. her first products re quark, a fresh curd cheese, and this is followed by Ballingarry, a Caerphilly-style cheese, and Fethard, a Chesire-style cheese. In 1983, Louis and Jane are founder members of CAIS, the new association of farmhouse cheesemakers which gathers together the nascent Irish artisan cheesemaking industry.

In 1984, the first Cashel Blue® is ready for the market. It is the very first Irish blue cheese and, initially, it elicits almost as much bewilderment as excitement in the country. The cheese wins its first accolade that year, being awarded 1st place at the Clones Argricultural Show. Louis and Jane establish the firm of J&L Grubb to produce the cheese. The following year, they receive their first U. K. order from the prestigious Neal’s Yard Dairy, beginning a long-standing relationship between Cashel Blue® and the United Kingdom, a relationship that will be underscored when Queen Elizabeth II is served Cashel Blue at a State Banquet to honour her historic visit to Ireland in 2012. (She is reported to have said ‘how much she liked both Milleens and Cashel Blue‘ during her state visit)

By now, Cashel Blue® has taken on the first of its local employes to keep up with demand for the cheese and, when the cheese wins the Supreme Champion Prize at the International Royal Dublin Society Show in 1987, one of the guest judges, M. Patrick Arena from the legendary Androuet company in Paris decalres that: “If Irish cheesemakers continue like this, they are going to have very good farmhouse cheeses. You will be able to export many very soon.”

In 1991, the dairy is expanded and production increases. A new cheesemaker, Geurt Van den Dikkenberg, joins the company. To this day, Geurt remains the head cheesemaker. In 1993 a brand new cheese begins its life when sheep are milked at the farm to make Crozier Blue, the only sheep’s milk blue cheese in the country. Crozier will echo the success of Cashel Blue® in winning many awards over the succeeding years.

A new generation enters the picture in 2004, when Sarah, Louis and Jane’s daughter, and her husband Sergio Furno bring their extensive experience in the wine trade to Beechmount Farm, where they quickly become responsible for the maturing of the cheeses, a role they fulfill to this day. A year later, Nigella Lawson’s best-selling book, “How to be a Domestic Goddess” is published, and features a recipe for Cashel Blue® biscuits. This is just one of many recipes by leading food writers which is inspired by Cashel Blue. By 2011, it is is time for the latest expansion at Beechmount Farm and a new purpose-built dairy is designed by Louis Grubb’s brother, Brian Grubb. It is a major financial investment in the future of the farm and the business, setting a template for the future and the next generations who will farm and make cheese at Beechmount Farm.