We have just signed a deal with local young Farmers Michael Crosse and PJ Pollard, who are now going to supply us with sheep’s milk for our Crozier Blue cheese. Crozier Blue, established in 1992, has been a very successful niche product for us. In 2015, 15 tons of Crozier Blue were sold, representing approximately 9,000 wheels of cheese, half of which are exported as far afield as Australia.

This new supply of milk will allow us to develop our sheep’s milk range, as before we had only a single supplier of the specialist milk. Pj Pollard, a former craftsman with a Green Cert, and Michael Crosse, a long term sheep farmer with a master’s degree in Agricultural Science; came up with the idea to sell sheep’s milk together. As Michael already has vast experience in the field, they found that it could be a sustainable or even profitable business for them, as it is quite a niche market. 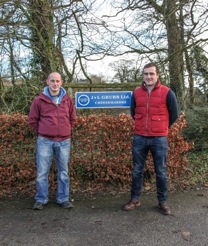 When interviewed, the two they said that they are “very proud” to be part of the multi-award winning Crozier Blue production which they both believe will “help our expansion as we grow as a business”. They will supply Cashel Farmhouse Cheesemakers with 110,000 litres of sheep milk annually from their flock of over 500 sheep in Ballinamona. These volumes may seem a lot, but with each sheep on average producing 1.8 litres per day, this is not a fast route to success. To quote Sarah Furno, our director, “This is a critical step in the development of sheep’s milk production in Ireland, a growth in the number of ewe’s means more breeding stock for the future. Let’s change the image of Ireland abroad – sheep aren’t only for meat, their milk is deliciously creamy and rich.” 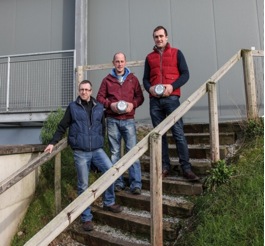 Our own P.J. Ryan (left) with PJ Pollard (middle) and Michael Crosse (right) outside the cheese house.

Michael Crosse and PJ Pollard start into lambing this week, they are supported by their families and there is a clear sense of excitement as Spring unfolds. Milking sheep is not just a business, it is a way of life. PJ confides “I am delighted to see the light in my mother’s eyes in the sheer anticipation of hand-nursing young lambs”. In the past 6 months many young farmers across the country have got into milking, but PJ and Michael are the only two to opt for sheep – choosing quality over quantity! While a cow may produce up to 34 litres a day compared to the mere 2 litres from a sheep, and this proves that these young men are true advocates of specialised farming at a time of commodity cow’s milk production.

Crozier Blue is available through our own Online Farm Shop, SuperValu stores and some larger Tesco branches. It is also stocked by many of the fantastic leading independents across the country, such as Sheridan’s Cheesemongers, Wrights of Howth and Country Choice in Tipperary, but to name a few!