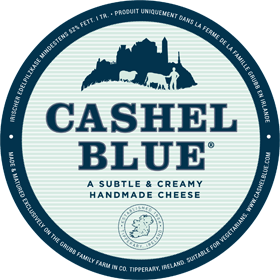 Characterful but not strong. Our youngest Cashel Blue® will reach you in Ireland and the UK at between 6 to 10 weeks of age and is pleasant, firm and creamy-edged with an established blue character – offset by a mouth-watering tanginess. By 3 months of maturation your Cashel Blue® will have broken down to a richer, fuller and rounder yet not strong flavour.

With time Cashel Blue® becomes creamier and indeed more balanced in flavour as the saltiness, blueness and gentle milky elements integrate together. From 3 months a gentle touch of spice may become apparent. Cashel Blue® can age up to 6 months of age becoming increasingly unctuous in texture with age. Beyond this point Cashel Blue® loses it’s way and enters the sphere of hot strong blues, an area we are not comfortable in. Here are some Pairing and Accompaniment ideas for Cashel Blue®, and also some mouthwatering recipes to try! 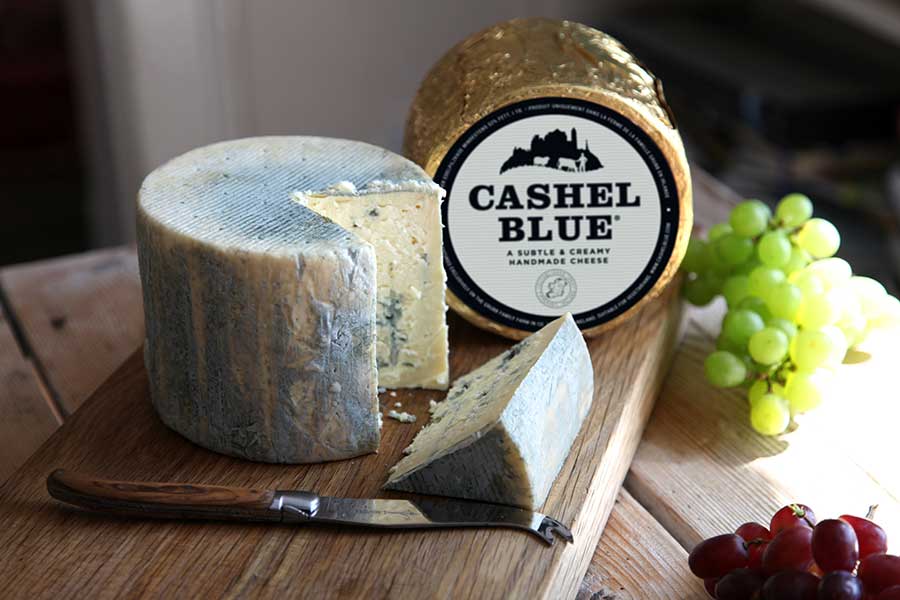 Cashel Blue® has a white appearance or paste as it is technically called when young turning increasingly towards a buttery yellow as it matures. Throughout this paste there is a blueing often referred to as having marble-like pattern. The rind, which with time can develop a film of surface mould is untreated and is therefore edible. It is intrinsic to the cheese and contributes to the breaking down of the paste, adding further flavour and complexity. N.B. the rind can taste saltier than the inner paste. Traditionally made in 1.5kg wheels (or thereabouts) and packaged in gold foil. Want to see the full story on how we make Cashel Blue®? Have a look at our step-by-step Cheesemaking guide. 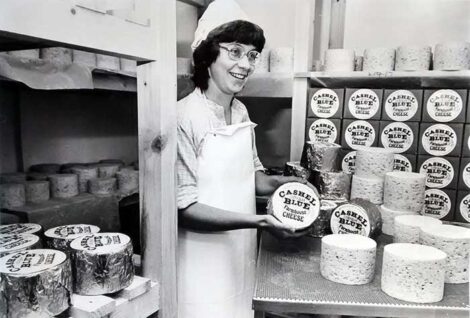 Established in 1984, Cashel Blue® is the original Irish farmhouse cow’s milk blue cheese. Cashel Blue® is a unique creation of Jane and Louis Grubb. Developed at a time when softer blue cheeses were a rarity in the English speaking world, Cashel Blue® truly set the trend as an alternative to the traditional and stronger Blue Stilton. Cashel Blue® does not aim to be like any other blue cheese, instead representing a style of blue cheese reflective of the people and place from which it hails. You can read our full story in the History Timeline here…

Cashel Blue® is named after the historic “Rock of Cashel,” a medieval castle that was once the seat of the Kings of Munster, and where lore has it St Patrick commenced the conversion of the pagan Irish to Christianity by using a shamrock to explain the Holy Trinity, giving birth to one of Ireland’s national symbols.

Cashel Blue® is sold exclusively in the USA as “Kerrygold Cashel Blue”. The typical age of Cashel Blue® on mainland Europe, North America and Australia is between 14-22 weeks of age.

Did you know we also make an Organic Cashel Blue? Click here to read more…

Here are our girls – the Cashel Blue Pedigree Herd coming in for milking. For more of these videos, please look at the Cheesemaking section.