All of us here at Cashel Farmhouse Cheesemakers have some big news for you all! We are developing a new type of cheese here, a hard cheese and guess what? It’s NOT Blue! We have yet to name the cheese as our first priority is to get the taste right, and sure if we get that right, hopefully everything else will follow. We will update you all when we name it!

This hard cheese was inspired by my own father Geurt van den Dikkenberg. Geurt is originally from the Netherlands, where he grew up before moving to Ireland. Growing up in the Netherlands he was always very fond of cheese as it is a very big market there with various different cheeses being produced, despite living in Ireland for many years he still continues the Dutch tradition of eating hard cheese for breakfast! When he first moved to Ireland he started making cheese in Cavan before moving to Cashel Farmhouse Cheesemakers to produce Cashel Blue® in 1991. He also helped create Crozier Blue cheese from sheeps milk and the more recent Cashel Blue Cream Cheese.

The initial trials for this cheese started all the way back in 2011 right here at the cheese dairy. The trials took place using the Cashel Blue® “copper cauldron” that now stands proudly at the entrance to the cheese house. These tests have been ongoing for the last 5 years and in the Autumn of 2015 our new custom built vat was delivered to the farm from Van Riet engineers in Holland. Louis Grubb was very jealous to see all this beautiful new cheese making equipment, very different to the early days of Cashel Blue® when he made do with whatever we could get his hands on second hand! 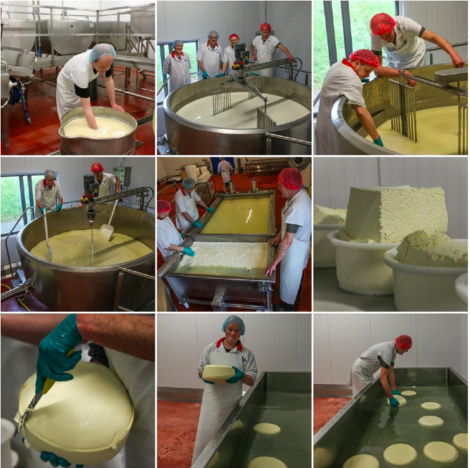 The first production day for this cheese was on Wednesday the 3rd of February 2016. There was a sense of excitement around the place as I arrived to work that morning to give a helping hand. The production team all seemed very confident that the making would be successful and that everything would go as planned. First Geurt put in the blend of ingredients into a vat of cow’s milk and stirred it for 2 hours before the curd was ready to be emptied out into a different vat. The curd was then separated from the whey, compressed and cut. Each segment cut from the block of curd was 5kg, it’s not surprising it’s a man’s creation, as typically cheeses created by women are a little daintier, i.e Cashel Blue® at only 1.5kg! The making is so different to that of our blue cheeses and everyone was over the moon that the first production day had gone so smoothly. The cheeses will be aged for a minimum of four months, although they are extra tasty at 9 months or so!

I am here on placement from college and I was delighted to be a part of the first production of the new hard cheese and I hope that all of you are excited to try my father’s new cheese!!