The Blues Down Under – Boccaccio Cellars

All of us here at Cashel Farmhouse Cheesemakers would like to welcome John Dinneen, who will be working with us on market development and support in Australia this year. John’s a young guy with a passion for cheese and we look forward to hearing how he gets on “Down Under” – so without further ado: take it away John!

When I first heard I’d be going to Australia I immediately pictured myself tanning on a beach, surfing 20 foot waves and wrestling crocodiles… well, I’m sad to say that these preconceived Australian stereotypes couldn’t be farther from the reality I’ve been met with since arriving in Melbourne. To date temperatures have averaged around the 10-12°C and we’ve had rain that’d rival even Ireland. So, with all that said, you’d be forgiven for assuming that my first few weeks in Australia had me a bit blue – but I’m glad to say that couldn’t be further from the truth! Call me a fool, but I love Ireland. I think it’s an amazing place with the best people, culture and FOOD; and since coming to Melbourne the rain isn’t the only thing that’s been reminding me of home. All my experiences thus far have glowed with an Irish-esk hue. Let’s take last Saturday for example.

I was out in Boccaccio, Balwyn, for the day doing an in-store tasting of our Cashel Blue® and Crozier Blue cheeses. Well, on route I punctured a tire on my bike, which resulted in me arriving somewhat flustered and preoccupied (my mind elsewhere on that abandoned bicycle). However, all of that was soon forgotten as I was welcomed warm-heartedly into the store by the lovely Sylvie (pictured below), who chatted away to me as we set up – helping to clear a space and set the tone for the craic we were sure to have that day. 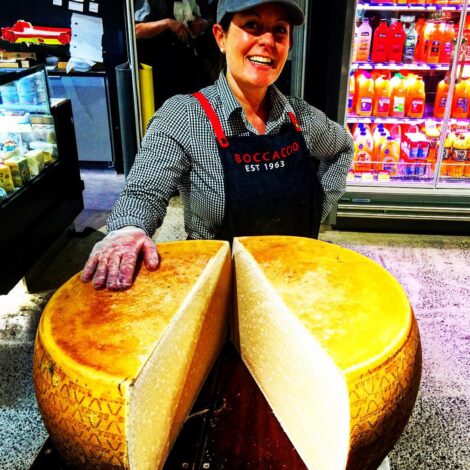 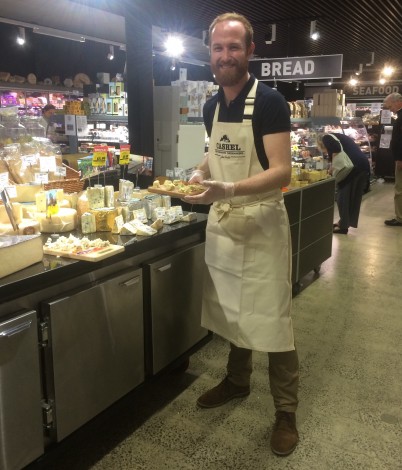 Next I met Bernard and Jerry: the head cheese mongers (pictured below: left and right respectfully). They’ve been working together for 9 years, Bernard teaching Jerry everything he knows about cheese. Their expertise was amazing – Bernard talked me through some of the different cheeses available and outlined his approach to the shop (which won me over instantly): to remove all the pompousness and pretension traditionally associated with cheese in Australia, by making it available at an affordable price and recommending new/interesting cheeses to his customers each visit. A quick look at their fridge saw that our Cashel Blue® and Crozier Blue were beautifully placed next to a great selection of Roquefort, Gorgonzola, Stilton & Danish Blue cheeses, alongside several local Australian blues (that looked delicious, but sadly the majority of which I have yet to try), including: Berry’s Creek Tarwin Blue, Blue Opal, Prom Country Cheese Venus Blue, Milawa Blue, Bay of Martyrs and Red Hill Mountain Goat Blue. 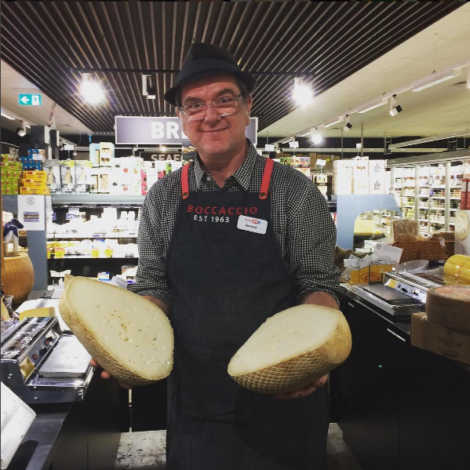 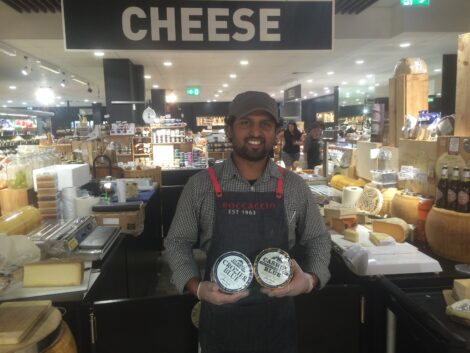 Then the real fun began: the shoppers approached the cheese counter. Boccaccio is the sort of specialist store that attracts people who want to explore and discover; the cheese mongers are passionate about what they do and so their recommendations are highly revered. All of this meant that my job on the day was an absolute treat: not only were people keen to try our cheese (the majority of them having never done so before), but they had the time to chat about the farm and listen to our humble story. Of course, amongst their positive responses, Bernard was quick at hand to tell the locals that he’d flown me all the way over from Tipperary just to talk to them and, on purchase, he never waned in his warning that eating too much Cashel Blue® or Crozier Blue will leave you sounding like an Irishman. 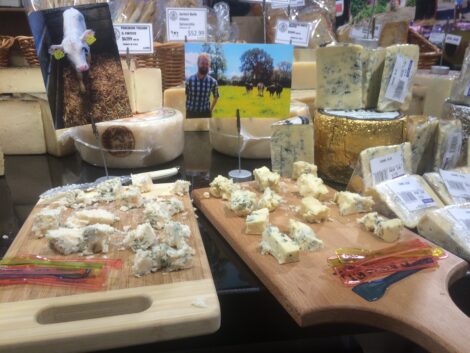 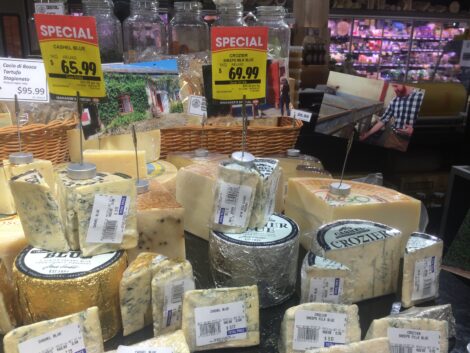 After the tasting I recovered my bike and embarked on the longer-than-anticipated journey home (having to go some distance to a nearest repair shop first), but despite this I couldn’t help allowing a cheesy grin spread across my face: the sun had finally come out in Melbourne and there I was, soaking up every second of it. So sure, thus far Australia might be somewhat different to what I imagined, but if I keep working with teams like Bernard’s and meeting new, interested cheese fans: I’ll be more than happy to embrace this taste of home down under.

If you know anyone looking for a nice cheese shop in Australia we recommend you point them in the direction of Boccacios. And if you’re a fan of cheese based in Australia why not give our Cashel Blue® or Crozier Blue a try?